A team of Haberdashers attended Knights Academy early this term to speak to a group of Year 11 and 12 students.

In an initiative to expose pupils to positive role models, Executive Principal Dr. Tesca Bennett asked good friend, ex-governor and Haberdasher Liveryman Kunle Olafare to interview former Knights Head Boy Chris Achiampong about his experiences at Knights Academy, as an Apprentice at EY and IBM, and as football scout for Liverpool FC.

Kunle jumped at the chance to visit Knights Academy and recruited three further Haberdashers to talk to students, treating Year 11 and 12 pupils to an intimate afternoon of motivational talks from leading role models from the business and creative worlds. The honest and inspirational talks were conducted at the billion pound building project that is underway to create a new sixth form centre with specialist classrooms, private study spaces, and a new canteen area with stunning views over Canary Wharf.

Freeman Jo Abeyie, who grew up on a council estate in Battersea and now runs her own creative industry diverse talent recruitment business, repeated the mantra to pupils: ‘no excuses, it’s up to you to make the change.’

Freeman Tim Campbell, who rose to fame as the first winner of The Apprentice, talked about the opportunities that it opened up for him, but reminded pupils that they can earn far more behind the camera than in front of it.

Good friends Kunle and Freeman Adrian Walcott met during their time at Hatcham College and have both gone on to make impressive achievements – Adrian is now Managing Director of Brands with Values, and Kunle runs his own financial planning practice in the City.

Students were engaged throughout, responses have been fantastic and many have requested more interventions just like this one. 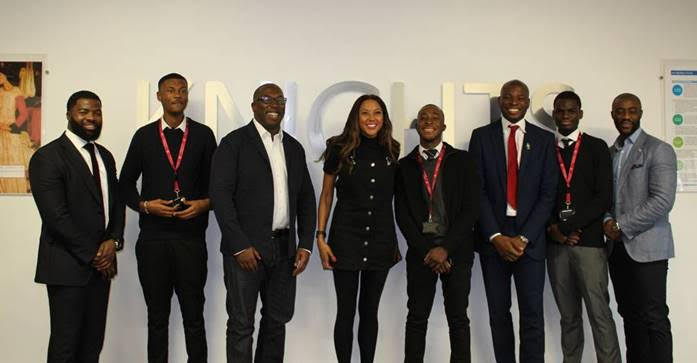